The Beach in Tel Aviv

The name Tel Aviv is a mixture of two words i.e. “old” and “spring”. The city itself is slightly older than 100 years and does not offer any historical attractions except of Jaffa district – the old fisherman’s village and the harbour. Instead, Tel Aviv became one of the most attractive entertainment and party scenes in the Mediterranean area.

We arrived in Tel Aviv in the night from Thursday to Friday. After having went through the cumbersome border control formalities we took the taxi to the hotel. The good thing is that the taxi to the city centre is at fixed fare (+/- 40 euro), irrespectively of the exact locstion of the destination in Tel Aviv. As the airport is located quite distantly from Tel Aviv (city of Lod), the fare looks OK, particularly for those who head towards more distant districts of the city like the beach area. The alternative transportation option is offered by the train service reaching outskirts of Tel Aviv, at the cost of 3-5 euro. The train service is off from Friday afternoon till Saturady evening due to Shabbat.

It is quite interesting to see the architectural setup of the Tel Aviv airport which consists of several, isolated areas/buildings which are connected through the walking corridors. This is certainly justified by the risk of terrorist attacks and the flexibility to isolate the areas at risk without blocking the entire airport.

The selection criterion for this hotel was quite simple. Namely, all hotels in the city centre close to the beach area were overbooked or hugely overpriced due to Passover holidays:-). Azraeli Center is located at the outskirts of Tel Aviv at the intersection of Ayalon Highway and Eliezer Kaplan Street. The pros of the location are the adjacent shopping centre with the supermarket, food court, restaurants, an attractive cost/quality ratio and the close proximity of HaShalom Railway Station (direct trains to Jerusalem at the price of 8 euro one way !). The cons are the distance to the main city’s entertainment attractions and the beach. The walking distance to them is 1 hours and the taxi cost equals 12-15 euro.

As the newcomers to Israel we were quite surprised by the security and passport control before entering the area of Azraeli Center, luggage control when entering the platforms of the railway station as well as the airport-like security control when visiting the mall. However, we understood the reasons why it has to be like this. Although security measures have been constantly strong since the first Intifada Uprising, the number of terrorist attacks decreased significantly after having built the walls between Israel and the Palestinian territories.

The hotel was OK. Thanks to the promotional offer for an upgrade we got a room which was easily accommodating three of us. The room had spectacular, breath taking views on the city, including the bathroom. Also, we were enjoying the access to the lounge offering meals, snacks and the local wine  throughout the day. It is quite pity that we arrived there during Passover holidays which resulted in the food offer being limited :-(. By the way, I am of the opinion that international holiday chains should not be suject to the local religious limitations in terms of food selection.

The Beach in Tel Aviv 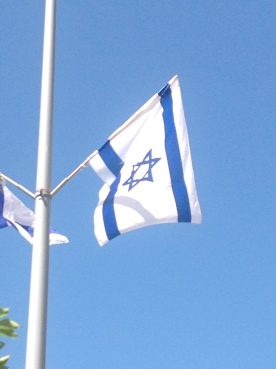 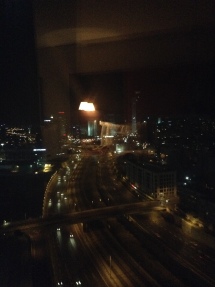 We did not have a lot of time to explore Tel Aviv and its entertainment attractions. Therefore, we decide to take one-hour-walk from the hotel to the beach enjoying the mediteranean architecture of the city. We enjoyed the commercial districts, coffe shops and the local market located in Ha-Shoter Square.

The beach area in Tel Aviv is beautiful. Actually, this is one of the most wonderful city beaches we have seen. Wide sandy sunbathing zones on one side, leisure walking strip for tourists, joggers and in-line skaters in the middle and skyscrapers skyline on the other side (with a lot of new construction developments going on). Only the lunch became a problem due to the limited number of the overcrowded restaurants on the beach.

Leisure strip at the beach in Tel Aviv